The Life of Mind

‘I consider myself to be a recovering alcoholic drug addict. As well as a human being; I had the human condition first of course. I feel lots of people are suffering emotionally and spiritually. My story just represents the substance and alcohol abuse part of a diseased society.’ 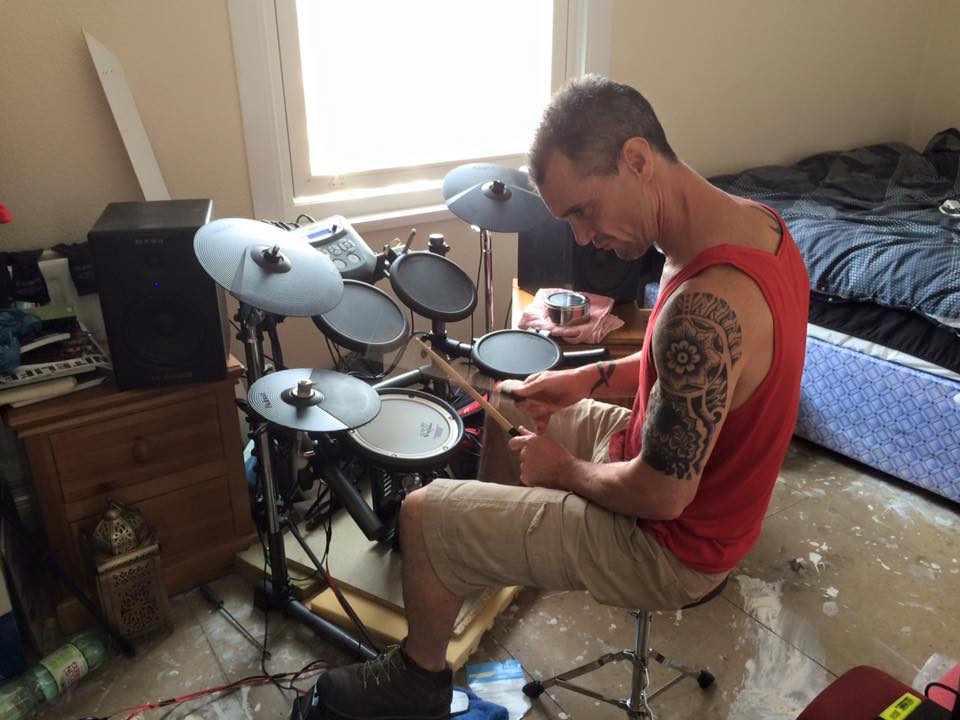 Colin is a father, a drummer, an assistant film maker and a dancer. He enjoys community, nature, music and the company of good people. The Sponsorship Fund is supporting him to continue to heal emotionally and spiritually and to recover from his early life traum.

Colin was brought up with a ‘very violent man’ for a father. He was severely neglected and abused, physically but also emotionally. ‘My father’s favourite weapon would be the instillation of fear via humiliation. I remember thinking clearly.... I am not a ‘shithouse’, I am just a boy with my Mickey Mouse T shirt on.’ As he got older Colin spent as little time as possible at home. Inevitably he became a fighter, often fighting older boys who wanted to prove themselves against the very violent ‘champion’ he had become. ‘I had a fast efficient rage in me on a trigger ready to go.’

Unable to bear how he felt, Colin would self-medicate with alcohol and drugs. Starting with cigarettes and alcohol when he was ten, by the time he was eleven he was smoking Cannabis and taking Amphetamine. ‘At fifteen I was at free festival dropping copious amounts of LSD; at sixteen I was a proper alcoholic. By the time I was seventeen I was an out of control wild and reckless alcoholic, simply lurching from one crisis to another.’

Colin couldn’t stand to be in his own company without hurting himself and so he travelled through the revolving doors of psychiatric units, jails, de-tox units and intensive care. ‘Self-loathing was the norm. I never did really discover how to ‘do my own life’.

20 years ago, Colin fell from a roof 3 storeys high ‘I fell, however I simply let go. I could not physically hold on any more due to the amount of drugs in my system, and spiritually I was dead inside. I could not live another day of my life’. Narrowly missing death, and with grievous injuries, his long road to recovery began. More recently it has been recognised that Colin has Post Traumatic Stress Disorder, with its origins in his childhood trauma, compounded by what his system had to cope with from his own behaviour: violence, drugs and alcohol abuse.

‘I eventually got clean and sober. However I was hit with a tidal wave of emotions the size of a mountain, some of which I never knew existed, emotions that I had suppressed and pushed down forever’.

From street sleeping, Colin moved to live in hostels, supported accommodation, and in mental health residential facilities, progressing to a ‘low support social housing unit’. He engaged with the AA’s 12 step programme, where he was supported by other recovering addicts to face and start learning how to cope with himself. Being in nature and communal living helped him to find connection, a ‘family', and continue to heal emotionally and spiritually.

3 years ago he began to go to Movement Medicine sessions offered by Apprentice Teachers, Ali, Rob, and Jurek, and ‘loved it!’ Eventually, encouraged by the people he met dancing, he went to an intensive weekend workshop with Caroline Carey Cole and Rosie Perks, called Re-generation.

‘That weekend and those women instilled some kind of faith within me. It wasn’t re-instilled, it was just instilled, like a brand new plastic wrapped discovery. I thought “Man, there are nice people out here! IT'S TRUE. It’s not a lie, it’s true, it really is actually true. My God!” The weekend was magical for me. Not all roses - it was challenging, but magical none the less’.

Colin explains how Movement Medicine has supported him. He says that the 12 Step Programme was an intervention that saved his life, but that Movement Medicine has been a way of healing emotionally and spiritually, and without that healing he could relapse into addiction: ‘My own personal connection with the dance is that I find it transformative. Like a drink or a drug changed the way I feel, well, the dance changes the way I feel also. There seems to be clarity, conclusions, awakenings, and what appear to be very solid realisations. I suppose the best way to describe my connection to the dance is, I change; I become something other than who my head believes me to be. When I say “change” I don’t mean to exchange or substitute the dance for narcotics, not hide within the dance, I mean TRUE change.’

He has attended further workshops, supported by organisers and teachers offering him free or low cost ‘assisting’ places. Supported by the Sponsorship Fund, and mostly paying for himself out of his limited state benefits, he is now participating in a yearlong group called the Journey of Empowerment.

‘I would like to work with people with mental health issues, potentially alcoholics and addicts. I would want to deliver the dance to them; see them change, if only for a while. That “while” will plant a seed in the psyche of those people, a message of HOPE.'

‘Addiction is a spiritual and emotional illness; the substances are merely symptoms of the illness. Held movement provides a space to dance and move through all those spiritual and emotional issues, ie to know its ok to be a lost and traumatised child in an adult body. It’s a path to move through them safely, a very ancient way to become something other than the mind-made fabrications that we are conditioned to hold. Movement Medicine is a tool to help us to learn to live our own lives, to help us to live with ourselves and thrive.'

Ongoing intensive workshops and the training to become a Movement Medicine teacher are a costly. If Colin and others like him are to achieve their dreams of receiving the ‘Medicine’ and then giving it back, the Sponsorship Fund needs generous support. Please give all the help that you can.

How do you claim your space to move and dance and be at the centre of your own circle in a context where there is inequality or injustice or violence or discrimination or war?

Interview with Ben and Samar June 2015.

If you would like to support the Movement Medicine Sponsorship Fund, please donate